Get ready to Stream

The Pierce Transit Board of Commissioners selected Stream as the name for Pierce County’s Bus Rapid Transit (BRT) system. Since the name was chosen for an entire BRT system, it will apply to the line planned for Route 1, as well as future Pierce Transit BRT projects on Routes 2, 3, 4 and 402.

Pierce Transit is planning a Bus Rapid Transit (BRT) line along a 14.4-mile portion of Pacific Avenue/SR-7 between downtown Tacoma and Spanaway. The corridor is currently served by Pierce Transit’s Route 1, which has the agency’s highest ridership. Learn more about this project and share your feedback HERE.

Click here for our interactive BRT Impacts map and to view all previously mailed documents.

To continue discussions about the BRT project, while meeting social distancing requirements, Pierce Transit hosted a live-streaming, public meeting on December 10, 2020. To all of you who participated, thank you for joining the conversation! In case you missed it, you may view a recording of the meeting below.

How Can You Get Involved?

Ninety million dollars in funding is already set aside for this project; $60 million from Sound Transit 3 and $30 million in state funding. The remaining funding is expected to come primarily from federal grants.

Pacific Avenue | SR 7 is Pierce Transit’s highest ridership corridor 5,950 average weekday boardings. There are more then 3,500 weekday boardings along the portion of the Route 1 being considered for BRT.

Approximately 55,000 residents live within a half-mile of the corridor, and that number will increase by an estimated 25% by 2040.

Approximately 11% of the people living along the corridor are dependent on transit for their travel needs.

The corridor stretches 14.4 miles from Spanaway to downtown Tacoma. 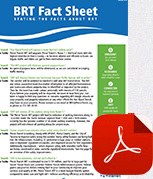 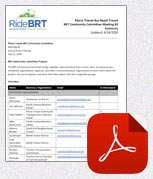 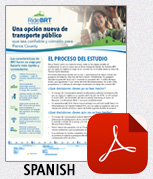