Step back in Time with Pierce Transit 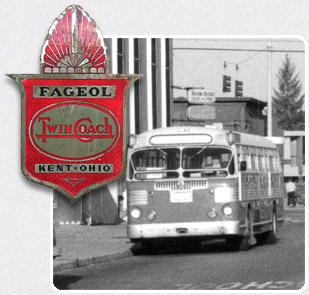 Pierce Transit is the proud owner of a 1948, 40-passenger Fageol 41-S Twin Coach Bus. Affectionately known as “the Twin” because of its twin engines designed to accommodate higher passenger loads, this historical gem makes appearances around Pierce County during summer months.

The 1948 bus features an all-aluminum body, and is powered by a six-cylinder mid-mounted gasoline motor with a two-speed automatic transmission. Pierce Transit’s modern buses are 40,000 pounds compared to the Twin Coach, which weighs only about 20,000 pounds.

The bus was manufactured by Frank and William Fageol, who established the Twin Coach company in 1927. Pierce Transit’s Twin is from the last model year built in 1948.

The bus was restored in a two-step process over a number of years. Tacoma Transit started the restoration more than two decades ago. The initial restoration got the vehicle running in the 1980s. In 2005, Pierce Transit began a full restoration. Parts were gathered from two buses acquired by Pierce Transit: one donated by the Bremerton Naval shipyard and another, nicknamed “The Ugly Twin,” from California. 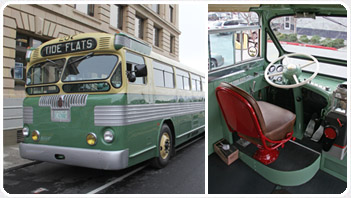 Pierce Transit Equipment Body Repairer Bob Soden and other maintenance team members installed new wiring, rebuilt the motor and transmission, built any aluminum side panels that could not be ordered, and reupholstered the seats with faux leather to give a vintage look. It was then painted yellow-gold and dark green.

All restoration and repair was performed by employees in their spare time while there weren’t other tasks to complete.